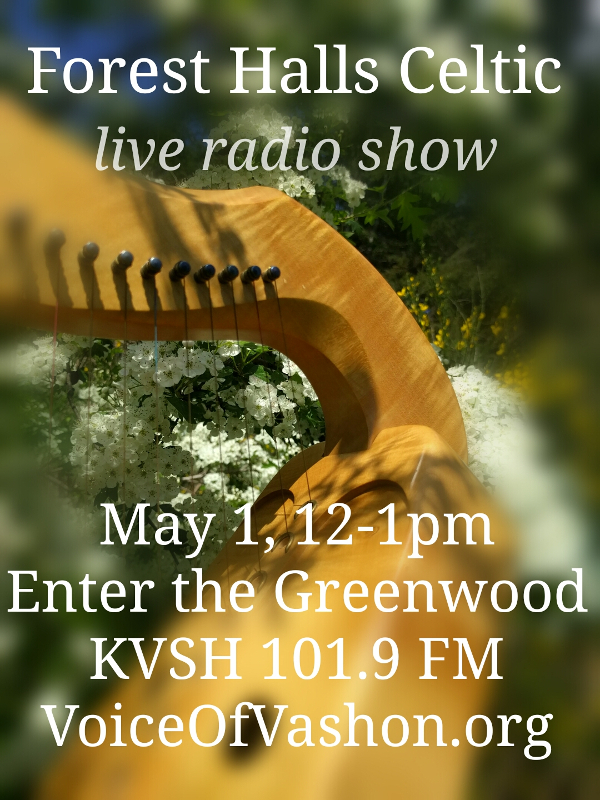 Welcome to Forest Halls Celtic, a program of mostly Celtic music with forays into folk, World, and historical music, and a pause now and then to enjoy some greenwood magic.

Today is the First of May, also known as the Celtic festival of Beltane. May Day falls pretty much midway between the Spring Equinox and the Summer Solstice, and was considered in times past to be the start of summer.

Here on the island you can still find festivals where folk and families dance today, weaving ribbons in intricate patterns around a May Pole, often to live music. The May Day festival might include a cake walk, and of course an abundance of food. The First of May a time of abundant flowering and green. And, to those who, peer deeper into the greenwood of this festival, it is a laughing, dancing expression of the mythic figure known as the Green Man

We’ll be celebrating the First of May – but also taking the opportunity to explore the turning of the seasons, the long strands of time, and touching into the mythic nature of the Green Man and the May Queen.

Listen to the latest Forest Halls Celtic program on demand.

Let’s head out into the forest …

Forest and Fairies – harp set
“Virgin Forest” – Anne Roos (A Light in the Forest)
Anne performs in the Lake Tahoe, CA area and Nevada and beyond. Harpers know her for her “The Harper in Business,” a regular column appearing in the Folk Harp Journal. Thank you, Anne, for sharing your insights and expertise with the harp community!

In this piece we enter for the forest wood, and are immersed in its depth and beauty.

“The Faerie Queene” – Shelley Phillips and Friends (Pavane)
Shelley Phillips is a harper and oboist/English horn player (and player of other woodwind instruments) from Santa Cruz CA. Here she plays a tune by Turlough O’Carolan (1670 – 25 March 1738), a blind early Irish harper noted for his many melodic compositions that are played and loved to this day.

“The King of the Fairies” – Alan Stivell
Alan Stivell is famous in the harp world for his wire-strung harp playing and album “Renaissance of the Celtic Harp” which inspired many of us to take up the wire-strung harp. This music is from a video of a performance of Alan Stivell playing in a band, probably from the 70s. His harp is there on stage, but it’s the whistle that he adds to this music. The fiddler looks like he’s having so much fun!

“Annwvyn” – Christina Tourin (Illuminations)
Enter the Welsh Otherworld in its most mystical sense with this beautiful harp piece composed and played by Christina.

“Oak, Broom, And Meadowsweet” – Damh the Bard (Spirit of Albion)
Blodeuwedd or Blodeuedd, (Middle Welsh composite name from blodeu ‘flowers, blossoms’ + gwedd ‘face, aspect, appearance’: “flower face”), is the wife of Lleu Llaw Gyffes in Welsh mythology, made from the flowers of broom, meadowsweet and the oak by the magicians Math and Gwydion, and is a central figure in the fourth branch of the Mabinogi, a group of medieval Welsh tales.

Arianrhod had two sons by unusual means (a story in itself). Although she went lightly on her eldest son, she put three curses on the younger: that he would not receive a name unless it was given by her, he would not receive his armor unless from her, and the last curse was that he would never be allowed to marry a mortal woman. Through cleverness Math and Gwydion aided the younger son to receive a name and armor. They then created a wife for the son, now named Lleu Llaw Gyffes, out of flowers and named Blodeuwedd, meaning ‘Flower Face’.

In her wedding to Lleu Llaw Gyffes, Blodewedd, a creation and expression of the earth is Lady Sovereignty — the land wedded to the king. She is indeed the May Queen.

This song tells this part of the tale.

Damh the Bard is a British pagan folk singer-songwriter, and also a member of the Order of Bards, Ovates, and Druids.

Meet the Green Man
In art and sculpture the Green Man is a composite image — a face formed out of a mask of leaves, or a face disgorging or devouring leaves and vines. He is an ancient figure, linked with the Goddess in various ways — as son, lover, and guardian. Whether as a ‘foliate head’ carved in a European Gothic cathedral, or as a giant who tests the hero, challenging him to impossible tasks, the Green Man is the intelligence within the dark forest, in the Tree of Life.

He represents  irrepressible life, renewal and rebirth, inspiration. He is the guardian and revealer of the mysteries of Nature, and he unites humanity and the natural world. He can be rambunctious, or at times, (to humans “outside the green”) sinister.

Charles Stanley Causley, CBE, FRSL (24 August 1917 – 4 November 2003) was a Cornish poet, schoolmaster and writer. His work is noted for its simplicity and directness and for its associations with folklore, especially when linked to his native Cornwall.He’s won scads of awards, especially later in his life and is much beloved as a writer of the people. He wrote ballads and short poems that are easily understood but haunting. Ah, perfect segue to today’s poem.

From Wikipedia: “The Green Man is a mythic figure, often called Jack in the Green. He’s associated with growth, the forest, the spring, the wilderness and hence, a wild and natural creature. You’ve probably seen depictions of him, and indeed, those depictions on churches, buildings and the like are called Green Man. Here is a wonderful and thorough explanation of him and you’ll see his lovingness and dark mystery for yourself

Usually referred to in works on architecture as foliate heads or foliate masks, carvings of the Green Man may take many forms, naturalistic or decorative. The simplest depict a man’s face peering out of dense foliage. Some may have leaves for hair, perhaps with a leafy beard. Often leaves or leafy shoots are shown growing from his open mouth and sometimes even from the nose and eyes as well. In the most abstract examples, the carving at first glance appears to be merely stylised foliage, with the facial element only becoming apparent on closer examination. The face is almost always male; green women are rare.”

Green Man in The Garden

Green man in the garden
Staring from the tree,
Why do you look so long and hard
Through the pane at me?

Your eyes are dark as holly,
Of sycamore your horns,
Your bones are made of elder-branch,
Your teeth are made of thorns.

“Leave your house and leave your land
And throw away the key,
And never look behind,” he creaked,
“And come and live with me.”

But when I softly turned the stair
As I went up to bed,
I saw the green man standing there.
“Sleep well, my friend,” he said.

“Green Man” – Jennifer Cutting’s Ocean Orchestra (Song of the Solstice)
Jennifer Cutting’s passion for folk music was developed through her association with British folk revival leader A.L. Lloyd. In the early 1980s she became Lloyd’s last and youngest protégée, soaking up the same blend of scholarship and joy in performance that he had also imparted to members of Fairport Convention and Steeleye Span. She has collaborating with international superstars such as Maddy Prior and Peter Knight (Steeleye Span), Dave Mattacks (Fairport Convention) Tony Cuffe (Ossian) and Troy Donockley (Iona [UK])…

“Masque” – Knodel & Valencia (Forest)
Played entirely on two Celtic harps (drumming is on the harp soundboard) “Masque” is part of Debra Knodel and Jane Valencia’s (yes, that’s me) bardic performance, Forest. Masque is the music of the Green Man dancing! Deb plays the nylon-strung harp, I play the wire-strung harp.

Prose: “What it Means to be a Green Woman, a Green Man” – Jane Valencia Music: “Greenwood” – Paul Machlis (Greenwood)
I’ve been fascinated by the Green Man for years. Below is what I read on the show. Find more writings in the May 2014 edition of my ezine Acorn to Oak.

What it means to be a Green Woman, a Green Man.
Imagine: leaves sprouting from your body, before your eyes. Imagine peering from among those leaves – that layering of hand upon hand of leaves at your periphery, and the clear vision before you – and behind you. The scent is deep and sweet – pollen on the wind – aromatic essence that is nector in your mouth. You are like the butterfly, delighting of each flower with the tendrils of your tongue.

The essence swirls, sweet and deep and fills the garden within you – the veriditas, the green – within your soul. It spreads forth, a green energy that joins you with plants, insects, microorganisms, animals, streams, hills, mountains, sand, ice, stone – in short, all the world. The veriditas flows within and without you, down through the spiraling of leaf and bark and trunk that is your body. Through your legs into your feet. Your toes lengthen, spread, reach into soil, into the good rich loam. Your roots feast on that bounty of earth, reaching outward, interweaving with feet-roots-hands-fingers of others. You and the others share messages, perhaps even lives – for it is easy to connect this way, within the earth.

And above your heart-space, above the crown of yourself where you puzzle, wonder, imagine, think, are your arms stretched forth – your hands as leaves, collecting sunlight. You draw nourishment and energy and strength from the very soul of the universe itself. The sun, our Spirit. Moisture from the heavens waters us and inspires us. The weaving of our leafy selves with our kindred spirits – the Community of All Beings within and without the world – saves our lives.

How can we not be abundant?

How can we not be generous?

That is the message of the Green. To give and to grow, to heal and to nourish. To tease and to leap and to play, for we are abundant. We are the dancing, laughing Green.

“A Reaping” – Honey of the Heart
The melody is a traditional air The Moorlough Shore (also known as “The Maids of Mourne Shore”). The words were composed by Joseph Campbell (July 15, 1879 – June 1944), an Irish poet and lyricist. He is now remembered best for words he supplied to traditional airs.

Our island’s own, Maren Metke, taught many of us this song back in the days of her Madrona School. She changed the words a little to reflect the beauty and power of a whole family tending into the earth in this way. I’m delighted to play this live version of “A Reaping” performed by Honey of the Heart, which is Justin Ancheta and Maren Metke and their band. There’s word that this duo will be on Vashon this summer. I hope we all get the chance to hear them live!

From their website:
Honey of the Heart (fronted by Justin Ancheta and Maren Metke) is described as “a feast for the senses and a balm for the soul”, leaving you with “chills and an open heart”. This versatile, inspiring duo, sometimes backed by their dynamic and talented band, weaves together soaring, rich vocals and melodies… haunting, epic, three-part harmonies… contagious polyrhythms infused with deep, soulful presence and skill.

Their style is described as Folk, Latin, Gospel, Gypsy, Roots, Americana fusion with rich harmonies, and powerful vocals, suggesting a deep Soul influence. Their combined influences form a strong chemistry and flow, bringing a positive message and intimate breadth of landscape, blending contagious rhythm and melodies to sweeten the hearts of all who listen.

Thank you for joining me in the Greenwood!