Happy New Year! On this snowy day we touch into endings and beginnings, and of opening with curiosity and wonder to something new. In today’s show we enjoy celebratory music and some reflective music as well. 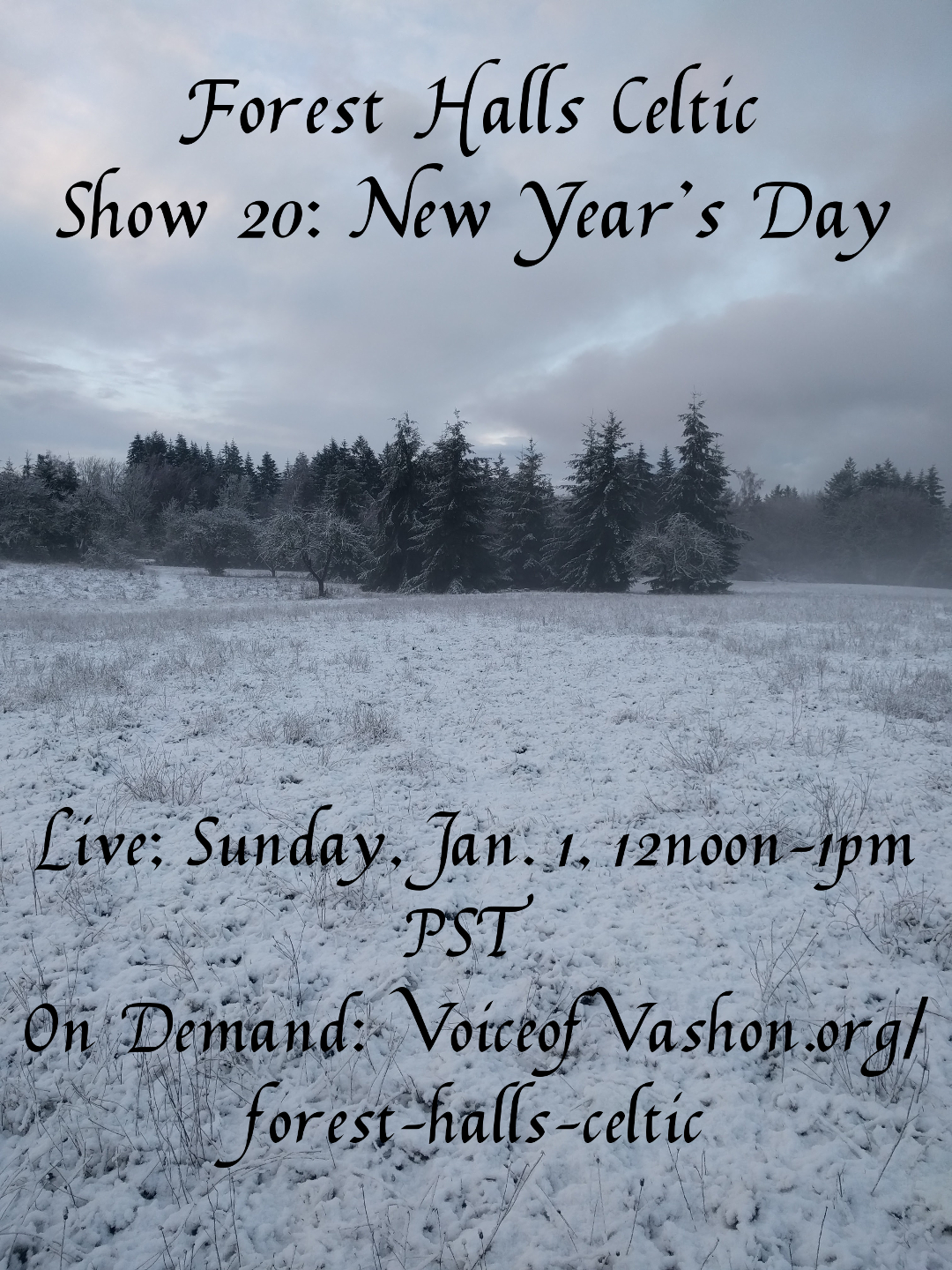 Format: “Track Title” – Artist (CD)
“Da Day Dawn/Cross Reel” – Tom Anderson, Aly Bain, Trevor Hunter (The Silver Bow)
Da Day Dawn is may be the oldest Shetland tune known, and having perhaps Norse roots. It was played only once a year – either on Yule morning (Christmas) or New Year’s morning (there’s a little discrepency about which).

“A shining debut by Boston-based fiddler, singer & composer GALEN FRASER, who blends passion & playfulness in all-original tracks that display his Scottish & American heritage, a life of immersion & exploration in the fiddle music of many lands, & his sojourn in the rich environment of Berklee College of Music.” — Culburnie Records

“The Wassail Song / All Through the Night” – Yo-Yo Ma (Songs of Joy and Peace)
Yo-Yo Ma’s rendition of a familiar English song, paired with a well-loved Welsh song.

“The Full Rigged Ship / The New Rigged Ship” – Ale Möller and Aly Bain (Fully Rigged)
Ale Möller  is a Swedish musician and composer. Aly Bain is a Scottish fiddler born in Shetland who learned his instrument from the old-time master Tom Anderson. he was a prominent member of Boys of the Lough, a Scots-Irish folk group, with whom he played for over 30 years. These two musicians play two of my favorite Shetland fiddle tunes. One of these days I’m going to sit down with this track, and figure out how I might adopt this style on my harp ….

“O’Carolan’s Dream” – Margot Krimmel (White Birds)
Margot plays a beautiful and unusual version of this melody. From Gadbaw & Krimmel’s website:
“Blind harper and bard O’Carolan (1670-1738) is regarded as perhaps the greatest Irish harper. He left behind a wealth of compositions, and though some lyrics to his melodies remain, little is known about the accompaniment he may have used.”

“Gloucestershire Wassail / Can Wassel” – IONA (Mid-Winter Light)
A track from the American pan-Celtic band.
From Iona’s website:
“Wassail, a word that conjures up visions of bundled revelers sharing a hot, spiced alcoholic beverage, is derived from the contraction of the Middle English phrase wæs hæil, meaning “be healthy”. Wassailing is alive and well throughout the Celtic lands, and has been handily absorbed into Christmas observances in the singing of carols from house to house, We combine the familiar tune of the Gloucestershire Wassail with a rowdy progression through a Cornish village. The group moves through the village requesting cakes and libation at each door, gradually gathering householders as it progresses and becoming increasingly more inebriated! This has long been one of IONA’s audiences’ favorites as we exhort them to become the drunken chorus.”

Translation:
Now Christmas is over and the New Year begin
Pray open your doors and let us come in.

“Cornish Wassailing” – Kate Rusby (The Frost Is All Over)

This next set is in honor and celebration of Keith, a friend and loved one of so many here on the island and beyond. The first song is about the mystery of death: truly, Keith – your spirit is now everywhere. The second song is called “New Year’s Day,” and I play it on this show especially for Sarah. The beautiful love you and Keith share is not bound by time and space.

We finish the set with Dougie MacLean’s rendition of a familiar New Year’s song.

Blessings on your passage, Keith.

“Arlington” – Wailin Jennys (40 Days)
The Wailin’ Jennys are a Canadian music group. Written by Nicky Mehta It is said that: “Mehta’s “Arlington” … is about ‘a bird … and death,’ and is heart-wrenchingly glorious.”

Where is your home restless wind
Is it there, is it here
Do you search for a place to belong
Search in vain, search in fear
Or is your spirit everywhere
Is your voice every tree
Your soul of the air
If there’s no home is there no death
Is there no death

“New Year’s Day” – Jane Valencia (RoseGarden)
A song of two sharing a love that is not bound by time or space.