Enter the Wildwood and feast your senses in the magic, mischief, and flowering spirit of Beltane by way of the Forest Halls Celtic streaming radio program. Airing today from 12-2pm PST, Show 49 and a re-airing of Show 3 “Green Man and May Queen” will be on demand for the next two weeks. Enjoy greenwood music, folklore, poetry, a tale, flights of fancy, and, as always, harp.

In Show 49 – Find harp in the music of Christina Tourin, Miranda Brown (in the band Jaiya), Alison Kinnaird (in the music of Eilidh MacKenzie). Enjoy bardic poetry with Halo Quin and Kevan Manwaring, a poem by Charles Stanley Causley, and a tale and prose by Jane Valencia 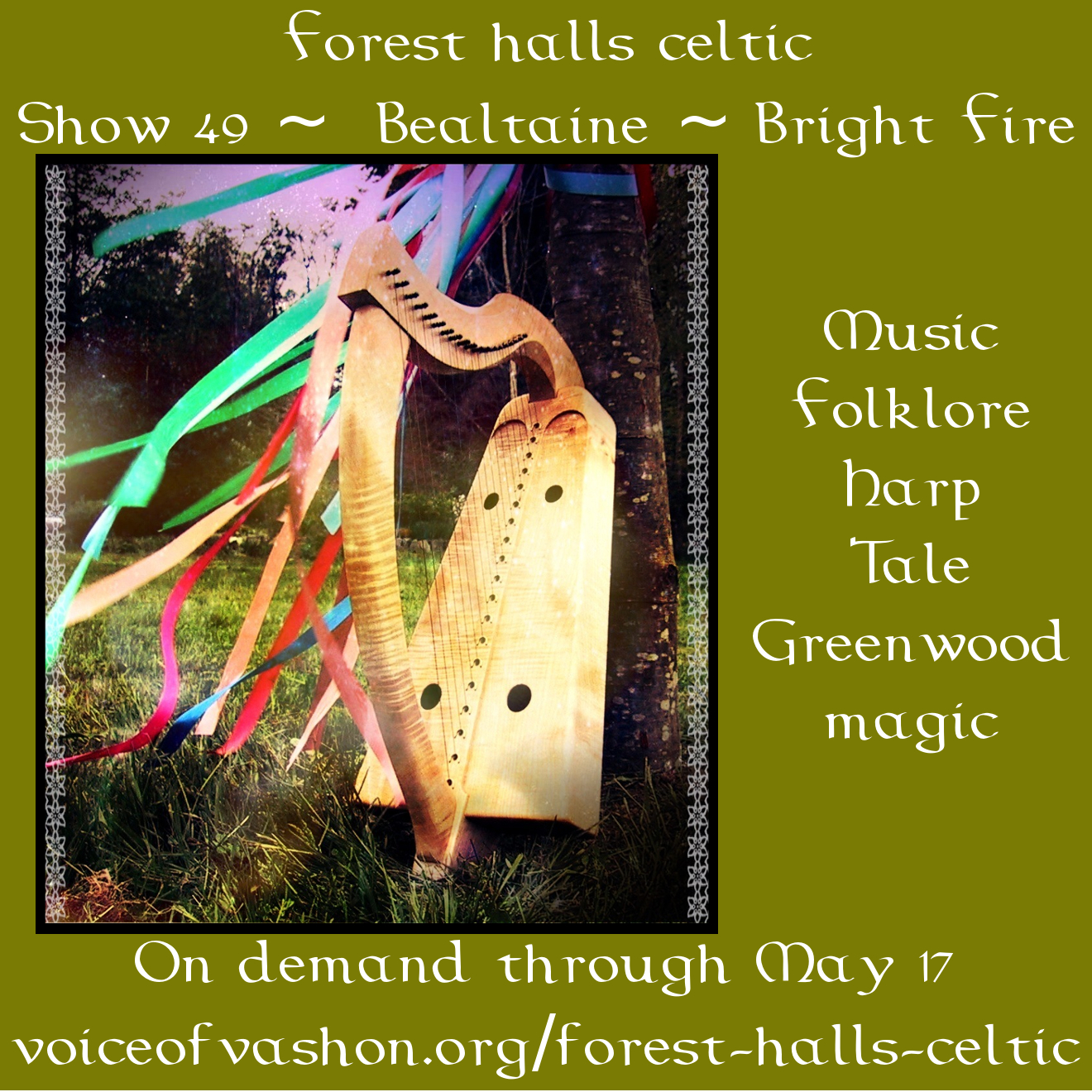 Show 35 is ready for your listening pleasure! In this one we feature music from three Breton artists, as well as some contemporary nature-rooted expressions (want to hear a heart-felt song from a tree? how about beautiful violin in the Wilderness, or a blessing for lost words?).  Harp music can be found in music by Dave and Sharon Thormahlen, Cécile Corbel, and Barry Phillips.  We followed this show with a re-airing of Show 14. Listen to both shows on demand for the next two weeks at VoiceofVashon.org.

Spring is dazzling right now. We continue our celebration of this bright, blossoming season with a green field of music that ranges from fun, lovely, to bold, and ancient in an exotic way.

I always have more than I can say about each piece than can fit into a one-hour show! The program notes are where you can find out a little bit more about the musicians and music. Also, this is a good place to look if you want to find contact info for any of the artists or events I mention.

The show is available on demand. Enjoy!

Next weekend this duo will be performing in Tacoma and on Fox Island with the excellent Tacoma choir, Cora Voce. Cora Voce is a Tacoma-based ensemble of about 40 singers dedicated to sharing and performing high-quality choral music.

Gadbaw and Krimmel will perform with Cora Voce a W. B. Yeats poem, “The Second Coming” set to music they’ve written expressly for the choir. This will be the premiere of the piece. They’ll also play their original, ‘Innisfree’ (another Yeats poem set to music), with the choir, plus a duo set. They’ll play two concerts, one on Saturday evening in Tacoma and a Sunday Matinee on Fox Island.  Visit: http://coravoce.org/performance.htm for more details.

Huizinga & Coulter (Liquid Gold) – “The Quarter Inch Wick(Kathleen Keane)/One Night In Bethlehem (trad. Ireland)” – (From a Concert Tour)
Edwin and William have been touring together for three years. This season they are performing together all over the United States as Liquid Gold, and as part of Tom Foley’s A Celtic Christmas. Canadian-born violinist Edwin Huizinga has established himself as one of North America’s most versatile violinists. Grammy award winning guitarist William Coulter has been performing and recording traditional and classical music for over 25 years. We heard him last show on the track by Orison.

They are performing on the island.

Niamh Parsons – “The Water is Wide” – (Blackbirds and Thrushes)
Niamh Parsons is a singer of contemporary and traditional Irish music, and is herself Irish. This is a favorite traditional folk song of Scottish origin, based on lyrics that partly date to the 1600s.

Gadbaw & Krimmel – “The White Bird (W. B. Yeats poem)” – (Live at the Black Rose Acoustic Society)
“The White Birds” is a Yeats poem that Gadbaw and Krimmel have set to music. This poem is one of several by Yeats ignited by his turbulant relationship of unrequited love with Maud Gonne, an English-born Irish revolutionary and suffragette. Walking along a cliffside near a seaside village, Yeats proposed to Maud for the first time (he proposed to her four times over several years). She during that walk expressed a wish to become a seagull. This poem is Yeats’ take on what she meant by that wish, and his own yearning that they could escape the landscape that interferes with them apart by heading out as white birds to the “Danaan Shore,” a land of myth and blessing.
Silly Wizard – “If I Was a Blackbird” – (Wild and Beautiful)
This song features the warm and gorgeous vocals of Andy M. Stewart. As eloquently expressed in his obituary, “Andy M Stewart was a Scots singer and songwriter who was at the forefront of a resurgent contemporary Scottish folk scene in the 1970s as the voice of the Edinburgh-formed group Silly Wizard. A well-spoken raconteur on the live stage, whose ability to introduce his songs informatively and with genuine humour enhanced the experience of hearing them, Stewart wrote music and lyrics which are – particularly in the case of his ballads – rich and still freshly emotive.”

The obituary also pointed out that Andy M. Stewart was “A skilled banjo player who used his middle initial to distinguish himself from the elder Scots singer who shared his name.”

What a loss to our Celtic music community! But his lively and passionate spirit as expressed in his gorgeous and rollicking songs muisc certainly does live on.

The San Francisco Scottish Fiddlers have concerts with our Director, Alasdair Fraser, coming up on the weekend of April 22. Perhaps some of your listeners would be interested, if they live anywhere near one of the venues. Here’s a graphic of our poster for the concerts, with information on it. There’s also information about the concerts on their web site sfscottishfiddlers.org. Yountville, Sacramento, Livermore.

Here’s a snippet of lore to welcome you into Dandelion.

Some names for Dandelion (Taraxacum offinale):

In Glencoe, it was recorded that those with ulcers ate Dandelion leaf sandwiches to help cure their plight.

Young leaves are tasty in salad. Use them like spinach! You can make Dandelion wine with the flowers, as well as Dandelion fritters – a favorite recipe with my family each spring.

Tips for correctly identifying Dandelion, plus a slightly different recipe for Dandelion fritters (+variations) can be found here.

A great plunge into the nutrition and medicine of Dandelion can be found here.  Dandelion is  surely one of the herbs that Airmid had collected in her cloak!.

I would also include that her style is reminiscent too of Jacqui McShee of Pentangle. What do you think? Enjoy!

Violaine Mayor – “Tud Kembre” – (Gens Cambrina)
Violaine Mayor  is a Breton wire-harp player, adapting historical techniques to traditional Breton music. This tune has very much of a Breton dance feel, then segues into vocals in a plainchant style.

Patsy Seddon is a harper, vocalist, and fiddler who is known for her playing in the Scottish harp duo Sileas and the all-woman folk band, The Poozies. Barnaby Brown leads the revival of the northern triplepipe, the precursor of the bagpipe in Britain and Ireland.  The triplepipe is basically a bagpipe without a bag, and is played with the two chanters and a drone in the mouth, so you need to use circular breathing. and is basically a bagpipe without the bag. The bag part of the pipes came arrived in Britain in the 13th century.

The northern triplepipe tradition of Britain and Ireland died out in the late Middle Ages.