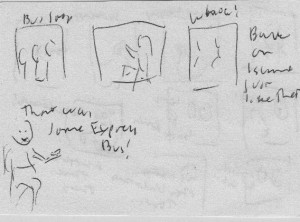 Okay!  So I’ve been tussling with Because Of The Red Fox in your traditional novel form.   And I’ve been making sketches — seeing whole flows of pages and a whole different ordering of the story — in manga form.  It’s quite possible that this story wants to be something else right now!  Maybe it will turn back into a novel, or maybe I’ll find that a 10 volume manga series (what it seems to want to be right now) is its true form.  Or maybe some combination of both:  a graphic novel followed by a novelization.  Who knows!

Here’s what I’m going to do this week:  outline that manga series, and make some sketches.  Next Friday I’ll share some of what I’ve come up with.

In the meantime, I’ll post a little here about the workshop I went to yesterday.  Children’s historical fiction writer Karen Cushman spoke to a group of teens and parents about writing novels and about how to bring historical fiction to life.  Karen Cushman has written 9 novels (7 are out in the world), including a Newbery Honor and a Newbery Award winner for most distinguished children’s books.  She even brought her Newbery medal for us to see.

Now, when I was growing up I read voraciously, and several of my very favorite books ended up being Newbery Award winners.  I had this dream of writing an amazing magical fiction series like Susan Cooper’s The Dark Is Rising sequence, and winning a Newbery Award for one of them, as she did, and becoming an acclaimed writer.

So here I am yesterday, listening to Karen Cushman talk about writing, seeing her manuscripts, and glimpsing that Newbery Award.  I think about my own novel and my struggles with it.  A big part of the tussle has been that for ages I’ve seen comic art as some of the story, perhaps even all of it — but it’s hard to let go of that dream of being a mainstream published children’s book writer with the possibility of winning that Newbery.  That probably seems a bit silly!  It both does and doesn’t to me.

It does — because I’ve won lots of awards over the years.  I find that they mark events or accomplishments that are important to me at the time, but they themselves are not important.  It’s nice to be recognized by others for one’s love of something and dedication to it, and for doing it well (most of my awards were for music), but in the end I don’t need those medals and certificates to remind me of my love for those things.  And indeed I’ve gotten rid of all those medals and certificates and trophies (I took pictures of them and let them go).

It doesn’t — because writing children’s novels has been a dream of mine since I was 7 years old!  Though at this point I must admit that I may have held on to it so long more because it was a long-held dream than because it really still is my dream.  When I was that young I also drew comics.  If graphic novels or manga had been part of my life then, would I have longed to be a writer/illustrator of that form?

In the end, these questions don’t matter.  Right now I have a story that wants to be in a form that others can enjoy too.  I have no deadlines for completing the story except for what I type right here to you.  I want the story to be fun.  And, no, it doesn’t have to win any medal.  If I end up creating it and publishing it in manga or graphic novel form it doesn’t mean that I can’t write novels later!

As a child I created my comics and newsletters and novels and stories just for the love of it, not because I was trying to get something published.   I imagine that whatever you like to create — stories, art, or anything else — it’s because it’s what you love to do.  In the end creating is just our own personal adventure with some art or project that wants to be here too.

What are you writing, drawing, building, creating — right now?