Listen to the latest episode here. 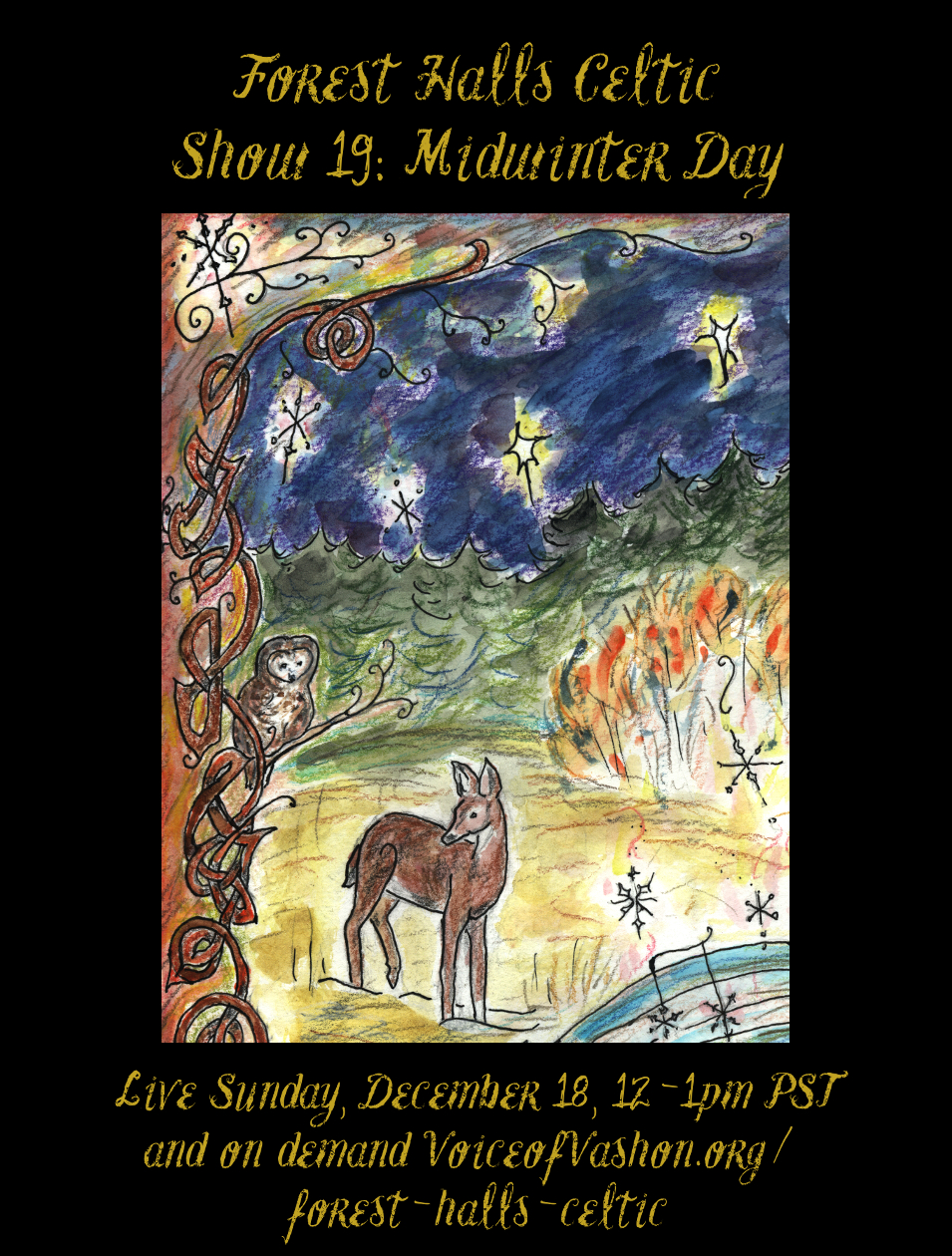 “Away in a Manger” – Chris Newman & Maire Ni Chathasaigh (Christmas Lights)
A lovely interpretation of this classic carol, with guitar, Irish harp, and flute.

The dark of winter wraps around us tight.
The lamps are fired, and flickering light
beats time to the fiddle as notes float softly down, like the years’ first snow.
While outside the window a blast of late December wind
whistles harmony to the drone of the pipes.
We push the old year back against the wall
so we can dance a jig for Christmas and welcome in the new

Underneath a winter sky,
A distant train sings out the miles.
And so I wonder can it be,
Will every mile bring you to me?
A promise made may still come true,
So I am waiting here for you.
If you don’t come, what will I do?
Who shall I tell my secrets to?

“Sol Invictus (Undefeated Sun)” –  Thea Gilmore (Strange Communion)
This song reminds us that the sun is returning.  Thea Gilmore is an
English singer-songwriter.

“Coventry Carol” – Paul McCandless (Winter Solstice III)
As a former oboist and English horn player, I always have an ear for fine playing of these instruments. Here’s a beautiful arrangement of this 16th century English carol.

“Leanabh an Aigh” – Sileas (File Under Christmas)
Many of us know this melody as “Morning has Broken,” a hymn made famous by Cat Stevens. That hymn was set to a melody of an older song. The Scots Gaelic lyrics “Leanabh an Aigh” (Child of Joy), were written by Mary MacDonald (Màiri Dhòmhnallach) (1789–1872) to a traditional tune.

“Cold Winter” – Kate Rusby (The Frost Is All Over)
Lovely song by an amazing traditional English singer-songwriter.

“Home for Christmas Day” Solas (Soundcloud)
Written by Seamus Egan and Mick McAuley, this song imagines what a newly arrived immigrant to Butte might have felt facing his or her first Christmas in foreign land far from the warm embrace of family and friends.

Solas is an American musical group officially formed in 1996, playing Irish traditional music as well as original compositions that dabble in the country, rock, and americana genres. Their name comes from an Irish word meaning “light.”