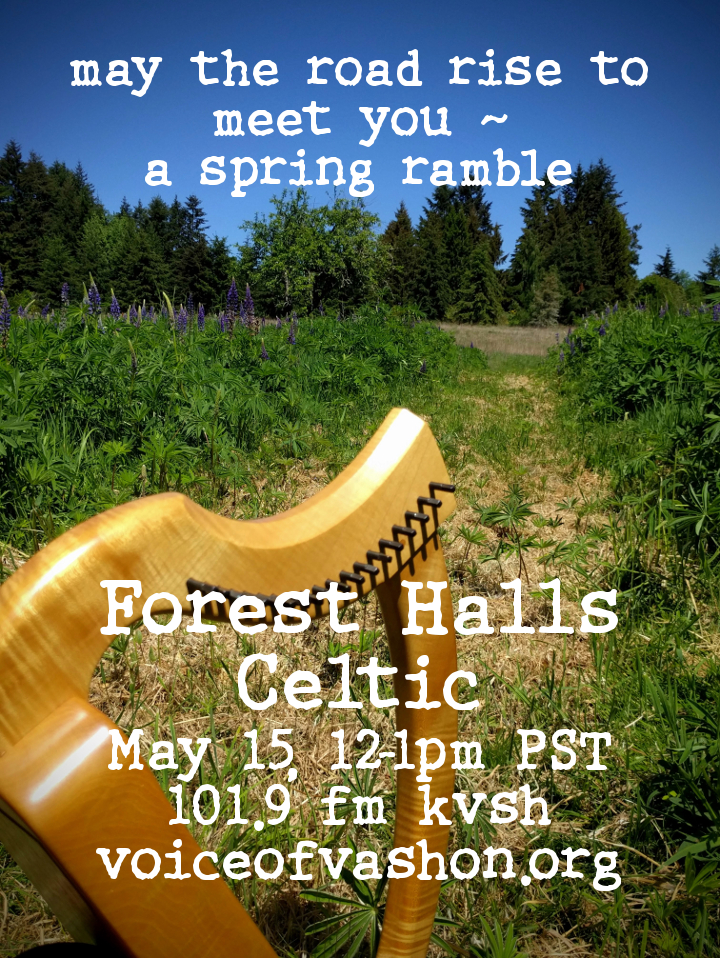 It’s a lovely day for a springtime wander! Okay, so the sky is that milk-gray, and it’s a bit cool out … but musically the sun is shining, and there’s a timeless Celtic quality to the fields and waters ….

We now set off on our melodic ramble.

Listen to the latest Forest Halls Celtic show on demand

“Trip to Ballyshannon” – Steve Baughman (Farewell to Orkney)
Ballyshannon is a town in County Donegal, Ireland. This is a popular session tune. Steve Baughman is a Celtic guitarist based in San Francisco and a good friend of mine. Hi Steve!

“The Geese in the Bog/Jig of Slurs” – Tannahill Weavers (Best of the Tannahill Weavers 1979 – 1989)  The Tannahill Weavers are one of Scotland’s premier traditional bands. They originated from a session in Paisley, Scotland and took their name from the town’s historic weaving industry and local poet laureate Robert Tannahill. They’ve been performing since the 70s, and were the first professional Scottish folk group to successfully incorporate the full-sized highland bagpipes in their on-stage performances.

“Jig of Slurs” is a Scottish tune a bunch of us South Bay Area folk harpers were learning back in the late 80s when we were all taking lessons from harper and piper, the late Chris Caswell. I’m not sure our families ever recovered from us hammering at that tune!

Ci an Fhideall/Cupair thu, Taillear thu – Karen Matheson (Urram)
Karen Matheson is well known for her compelling vocals in the Celtic super-group, Capercaillie. Here she performs a strathspey, followed by a song about a cooper, a tailer and a fisher who cannot get a wife.

From her website:
“Karen’s performing life began as a child in her local village hall in Argyll on the West coast of Scotland, where she was brought up immersed in the deep well of traditional songs. … Her new solo album (October 2015) is a musical love letter to her families’ Hebridean roots, with a collection of timeless Gaelic songs that evoke the character and atmosphere of Island life, through waulking songs, love songs, lullabies, mouth music and evocative poems to the surroundings.”

“Sacred Day” Poem by Beth Atchison / Background:. “Secluded Beach” Seamus Byrne (Just Before Dawn)
In browsing the internet for Celtic blessings for travel, in honor of the theme for today, I came upon this poem by a Pacific Northwest poet. To me it has a Celtic feel.

Contemplating the shape and form of this life today
may I travel lightly
may I honor the sacred expression of everything
may I be devoted to kindness
may I be enhanced by all that I encounter
may softness take root wherever un-forgiving once was
may I be led through the opening beyond the closing
may I bear witness to your holiness as well as mine
may I remain curious, willing, open, teachable
then fill my dreams tonight with the irrepressible truth
the language of love spills itself out everywhere

We head out into the mists of time and legend ….
“Newgrange” – Clannad (Magical Ring)
From the Newgrange website:
“Newgrange is a Stone Age (Neolithic) monument in the Boyne Valley, County Meath, it is the jewel in the crown of Ireland’s Ancient East. Newgrange was constructed about 5,200 years ago (3,200 B.C.) which makes it older than Stonehenge and the Great Pyramids of Giza. … The mound is ringed by 97 large kerbstones, some of which are engraved with symbols called megalithic art.

Newgrange was built by a farming community that prospered on the rich lands of the Boyne Valley. It is best known for the illumination of its passage and chamber by the winter solstice sun. At dawn, from December 19th to 23rd, a narrow beam of light penetrates an opening known as the roof-box and reaches the floor of the chamber, gradually extending to the rear of the chamber.

As the sun rises higher, the beam widens within the chamber so that the whole room becomes dramatically illuminated. This event lasts for 17 minutes, beginning around 9am. The intent of the Stone Age farmers who build Newgrange was undoubtedly to mark the beginning of the new year. In addition, it may have served as a powerful symbol of the victory of life over death.”

Clannad the Irish family group is beloved for such timeless music as ‘Theme From Harry’s Game’, ‘In A Lifetime’, ‘I Will Find You’ and the sound track to the ‘Robin Of Sherwood’ TV series, and for their renderings of traditional Irish music. They made a welcome return to the stage in March 2013 to mark their 40th Anniversary, and that year, released their first album since 1998.

Their album “Magical Ring,” which this tracks is from, was one of the first Celtic albums I ever owned, and one that I very much loved.

“Dinogad’s Smock (Pais Dinogad)” – Ffynnon (Celtic Music From Wales)
From the Welsh group, Ffynnon’s website: “The first four lines of a 6th century nursery rhyme written in the margin of Britain’s earliest heroic poem ‘Y Gododdin’ – it is a forerunner of the English ‘Bye Baby Bunting’. The second set of numbers, yan tan tether, is Cumbrian sheep counting. Cymraeg (Welsh) was spoken in Cumbria until the twelfth century and is still remembered in the way Cumbrian farmers used to count sheep. During the ‘Heroic Age’, much of the treasure of Welsh poetry was written in Cumbria and Strathclyde.”

This summer, the Bay Area Youth Harp Ensemble – a group of 12 harpists, ages 10-22 will be on tour from June 29th to July 5th in Northern California’s ancient redwood forests to play harp music among the trees to raise awareness for the preservation and protection of these trees, support local conservation efforts, educate these dedicated young harpists, and bring beautiful, healing music to the community and the forest! They have a Kickstarter campaign underway to help fund this tour. Find out more about their project, and support their efforts here.

“May the blessing of Light be on you” – An Irish blessing / “The Holy Touch Suite” – Therese Schroeder-Sheker (The Geography of the Soul) An Irish Blessing. I couldn’t find out any more about it than that!

May the blessing of Light be on you
Light without and light within,
May the blessed sunlight shine on you
And warm your heart till it glows like
A great peat fire, so that the stranger
May come and warm himself at it,
And also a friend.
And may the light shine out of the two eyes of you,
Like a candle set in two windows of a house,
Bidding the wanderer to come in out of the storm.

And may the blessing of the Rain be on you
The soft sweet rain. May it fall upon your spirit
So that all the little flowers may spring up,
And shed their sweetness on the air.
And may the blessing of the Great Rains be on
You, may they beat upon your spirit
And wash it fair and clean,
And leave there many a shining pool
Where the blue of heaven shines,
And sometimes a star.

And may the blessing of the Earth be on you
The great round earth; may you ever have
A kindly greeting for them you pass
As you’re going along the roads.
May the earth be soft under you when you rest upon it,
Tired at the end of the day,
And may it rest easy over you when,
At the last, you lay out under it;
May it rest so lightly over you,
That your soul may be out from under it quickly,
And up, and off, and on its way to God.

Therese Schroeder-Sheker is a musician, educator, clinician, and academic dean of the School of Music-Thanatology and the founder Chalice of Repose Project, which teaches and offers a particular type of music to the dying, a legacy from certain medieval monastic practices.

The interplay between Matt Molloy on flute and Kevin Burke on fiddle on this slow reel is just plain beautiful.

“Lord Galway’s Lamentation & Síle Ní Chonalláin” –  Siobhán Armstrong (Youtube) Siobhán Armstrong, is player of historical harps with a particular passion for encouraging the rival of the early Irish harp. Among her many historical harp copies, she plays a replica of the medieval Trinity College or Brian Boru harp — the national emblem of Ireland — strung in brass and 18-carat gold. The harp is made by David Kortier, a harpmaker in Minnesota. I think the sound of the harp, as well as Siobhán’s playing, is absolutely glorious! This performance is from the Historical Harp Society of Ireland’s summer concert, in 2014, held in the Chapter House of St Mary’s Cathedral, Kilkenny, Ireland.

Let’s head out to the sea ….
Crossing to Ireland – Abby Newton (Crossing to Scotland)
From her website: “Abby Newton is well known for her groundbreaking work in the revival of the cello in American and Scottish traditional music. As part of the folk music revival of the past many decades there has been a movement to restore the unique richness of the cello to traditional music.

Today the cello is usually considered a classical instrument, but from the late 17th to early 19th centuries it was used in folk ensembles to provide low, driving rhythms for dance tunes and to render haunting Scottish airs. In those days, “folk” and “classical” music were often performed by the same musicians. Instrumentation was shared too, with violin and cello figuring prominently in both contexts. Many indigenous Scottish tunes were given formal arrangements by the great composers of the period. Haydn, Beethoven, and Mendelssohn all composed settings.”

As you may guess, if you’ve listened to my other shows, I’m a great fan of Paul Machlis’ lyrical piano playing. Here again, he offers his distinctive and beautiful accompaniment!

From Wikipedia: “Transatlantic Sessions is the collective title for a series of musical productions funded by and produced for BBC Scotland, BBC Four and RTE of Ireland. The productions comprise collaborative live performances by various leading folk and country musicians from both sides of the North Atlantic, playing music from Scotland, Ireland, England and North America, who get together under the musical direction of Aly Bain and Jerry Douglas to record and film a set of half-hour TV episodes. The Television director is Mike Alexander and the producer is Douglas Eadie.”

“Rann Na Mona” – Capercaillie (Delirium)
Capercaillie is a Scottish folk band, founded in the 80s, and continuing strong. Originating from Argyll, a region of western Scotland, the band is named after the Western Capercaillie, sometimes called a wood grouse, a native Scottish bird This audio is from a performance of Capercaillie, filmed at the Capitol Theatre Aberdeen in 1992. When you’re feeling weary of heart, you’ll want to head out to this lovely place by the sea where magic happens and you’ll receive everything you need ….

The English lyrics have been credited to poet and lyricist Joseph Campbell (1879–1944, AKA Seosamh MacCathmhaoil and Joseph McCahill, among others).

According to Wikipedia:
“The Lagan referred to in the title most likely pertains to the area of good farming land between Donegal and Derry known in Irish as An Lagán. The Lagan is the river that runs through Belfast. However, some argue that the Lagan in the song refers to a stream that empties into Lough Swilly in County Donegal, not far from where Herbert Hughes collected the song.”

and:
“Sinéad O’Connor is an Irish singer-songwriter who rose to fame in the late 1980s with her debut album The Lion and the Cobra. O’Connor achieved worldwide success in 1990 with a new arrangement of Prince’s song “Nothing Compares 2 U”.

Since then, while maintaining her singing career, she has occasionally encountered controversy, partly due to her statements and gestures—such as her ordination as a priest despite being a woman with a Roman Catholic background—and her strongly expressed views on organised religion, women’s rights, war, and child abuse.”

Listen to the latest Forest Halls Celtic show on demand

Thanks for joining me!