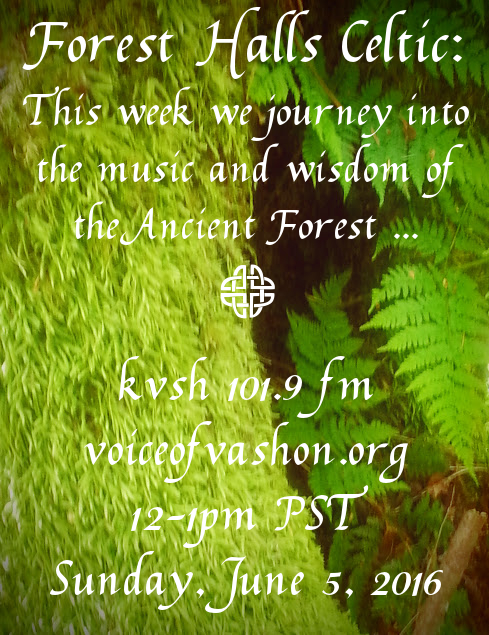 We make a slight detour into the musical realm of “Ambient Celtic” in this show devoted to the Ancient Forests.

“The Bay Tree Waltz/Faca Sibh/Jig Jazz” – The Poozies (Dansoozies)
The Poozies are an all-woman band who draw heavily from English and Scottish traditional music. Until a few years ago, both members of the Scottish harp duo, Sileas, were part of this group. You can hear Mary MacMaster here playing electro-harp, and Patsy Seddon starting with fiddle, and switching to gut-strung harp later in the set.

“Bonny Portmore” – Loreena McKennitt (The Visit)
“Bonny Portmore” is an Irish traditional folk song which laments the demise of Ireland’s old oak forests, specifically the Great Oak of Portmore or the Portmore Ornament Tree, which fell in a windstorm in 1760 and was subsequently used for shipbuilding and other purposes.

Visit http://www.sentryjournal.com/2010/10/11/the-fate-of-bonny-portmore/ for more detailed information about this tree and of the castle of Bonny Portmore.

“Moonshadows” Bay Area Youth Harp Ensemble (Innisheer)
We featured music by this group of young harpers in Show 4. Their Kickstarter campaign has been successful in helping them reach their goal to tour the Ancient Redwoods to play music among and for the trees, and to help raise funds for conserving these magnificent trees.

Let’s head out to the mythic forest. This next song is basically a listing of the sacred trees and their qualities of the Celts according to the ogham – or “tree alphabet” – of at least the modern-day Druids.

“Greenwood Grove” – Damh the Bard (The Hills They are Hollow)
This song presents wisdom as encoded and expressed by the trees.

I am the Birch of the new beginnings,
The Rowan star with magic guarding,
Alder sight the future showing,
Sweet Willow sees her Moon arising,
Ash the three realms he is touching,

Ogham (which means ‘language’ and is pronounced o’um, or och’um) … consists of twenty-five simple strokes centred on or branching off a central line. It is similar in purpose, but separate in origin from the Nordic runes. The Ogham characters were inscribed on stones and probably on staves of wood.

Its origins are lost in the mists of time, and most of the existing inscriptions have only been dated to the fifth and sixth centuries, but whether originally Celtic or pre-Celtic, we may sense that it carries with it some of the very earliest of Druid wisdom. Amongst our sources of information about its use, we have from Ireland the twelfth century Book of Leinster, the fourteenth century Book of Ballymote, and O’Flaherty’s Ogygia (published in 1793). And from Scotland, transcribed from the oral tradition in the seventeenth century, we have The Scholar’s Primer. But it was the poet Robert Graves who, following in his grandfather’s footsteps as an Ogham expert, brought this arcane system into public awareness once again, with his publication of The White Goddess in 1948.

We’ll follow with some music composed about the legendary Robin Hood of Sherwood Forest.

“Robin (The Hooded Man)” and “Lady Marion” Clannad (Legend)
Legend is a 1984 soundtrack album for the ITV television series Robin of Sherwood, by the Irish folk group Clannad. The Robin Hood series was much loved on both sides of the Atlantic.

“Tree Blessing Poem” – Mara Freeman (from her book Kindling the Celtic Spirit)
A field recording of Mara reading her poem.

I focus on composing atmospheric, evocative ethnic pieces that take my listeners on a journey through both time and space. I’m obsessed with medieval sounds, but also love Celtic/Northern European, Middle Eastern, Mediterranean and Far Eastern ethnic vibes. … Every piece you hear on my cloud is 100% original music that is composed, recorded (using VSTs), and produced by myself. No remixes, no covers. I don’t use loops. Nor do I use prerecorded “musical phrases” of any kind. I manually compose and record every single note of every instrument you hear …

“Brown Creek Trail” – Jon Parmentier (youtube)
As a backdrop to David Whyte’s poem and the nature news update, we have nature sounds recorded in the Prairie Creek Redwoods State Park in northern California.

Poet David Whyte grew up with a strong, imaginative influence from his Irish mother among the hills and valleys of his father’s Yorkshire. He now makes his home in the Pacific Northwest of the United States.

Sometimes
if you move carefully
through the forest,
breathing
like the ones
in the old stories,
who could cross
a shimmering bed of leaves
without a sound,
you come
to a place
whose only task
is to trouble you
with tiny
but frightening requests,
conceived out of nowhere
but in this place
beginning to lead everywhere …

An ancient forest in Snowdonia has been bought by the Woodland Trust after a campaign raised £750,000. The 220-hectare forest of Llennyrch – also known as the Celtic Rainforest – is a unique habitat of unspoilt atlantic oakwood and Woodland pasture. It included lichen that doesn’t grow anywhere else in Wales.

… What emerged was the instrument we know today as the Great Highland Bagpipe, and a form of music, piobaireachd, which is unique to the instrument.  It is a very stylized form of music. There is freedom in the theme or “ground” of the piobaireachd to express joy, sadness, or sometimes in the “gathering” tunes , a peremptory warning or call to arms.

The word “piobaireachd” literally means pipe playing or pipe music, but is now used to describe the classical music of the Great Highland Bagpipe. Another name for it is “Ceol Mor” meaning the Big Music, which separates piobaireachd from all other forms of pipe music (marches, reels, jigs etc. ) which are referred to as “Ceol Beag” – the Little Music.
To describe a piobaireachd is not easy. It consists of a theme or “ground”, with variations (which vary in number and complexity ) that follow the theme. The theme is often very slow, and the general effect of the whole piece of music is slow – slowness being a characteristic of Highland music.

Ceòl mór (big music), or pìobaireachd (piping) or pibroch, is the formal art music of the Scottish highland bagpipes1. However, in previous centuries, similar music was also played on fiddle and on the early clàrsach (early Gaelic harp)2, and many scholars have suggested that the modern living pipe tradition has its origins in the lost medieval Gaelic harp traditions. This music was also played on the fiddle in the 17th and 18th centuries.

I think that it is a mistake to think of the familiar living bagpipe tradition as primary – fiddle pibroch is often included under a general heading of ‘imitative music’3. To me it seems clear that that both pipes and fiddle independently took up the ceòl mór style and idiom from the much older harp traditions, which date back to medieval times in Ireland and Scotland.

We don’t have very much concrete information about Gaelic harp ceòl mór. It would have been an older strand of the Gaelic harp tradition, more complex and idiomatic than the ports or vocal music which were notated in the 17th, 18th and 19th centuries. I am only aware of one example of Gaelic harp ceòl mór noted from the playing of one of the old harpers.

We close our show today with a piece that is not Celtic, but which is inspired by the majestic old growth redwood.

“Forest Phoenix” – Jon Parmentier (Music for Redwoods).
Jon Parmentier is a guitarist who is much inspired and influenced by the nature of the northern California coast and the Coastal Redwoods.

Diolch yn fawr —Thank you for joining me!